yesterday was actually the snow day. although there was barely any snow. all the snow fell today.
i don't quite get the sense in that, but it offered time for some pictures. 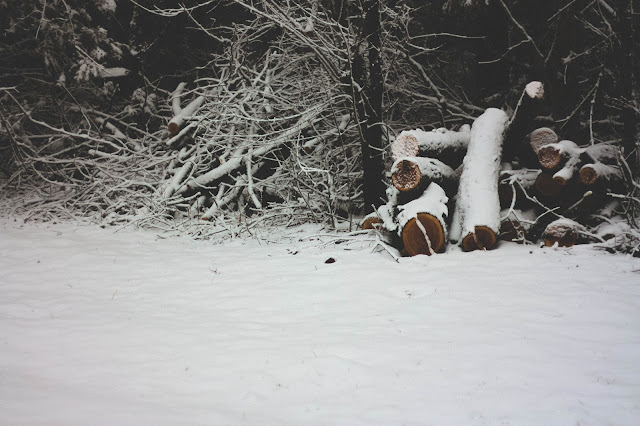 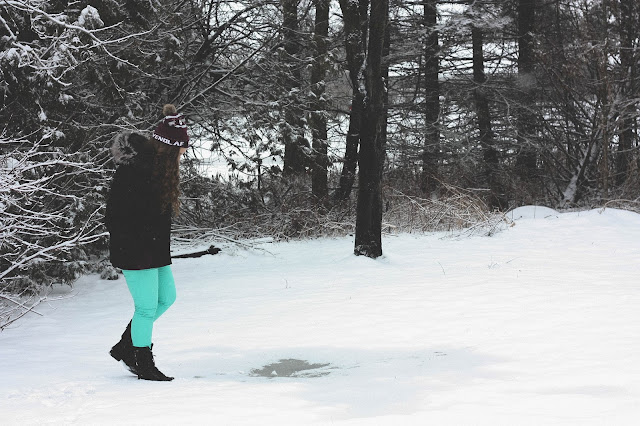 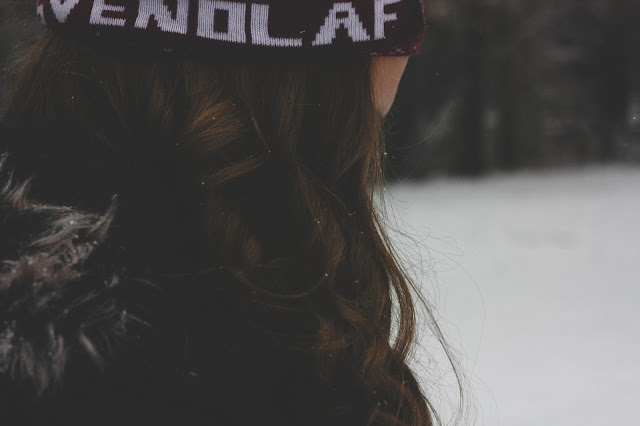 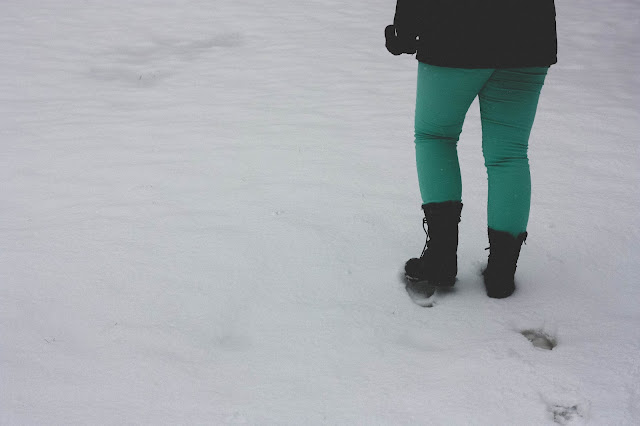 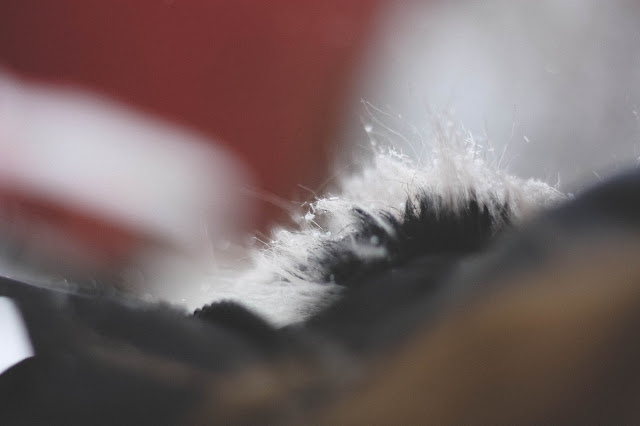 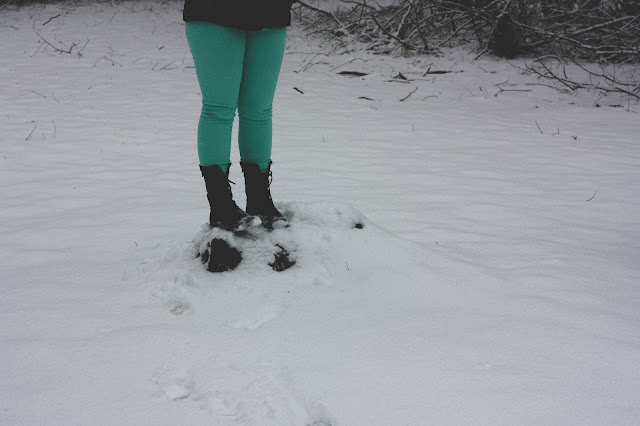 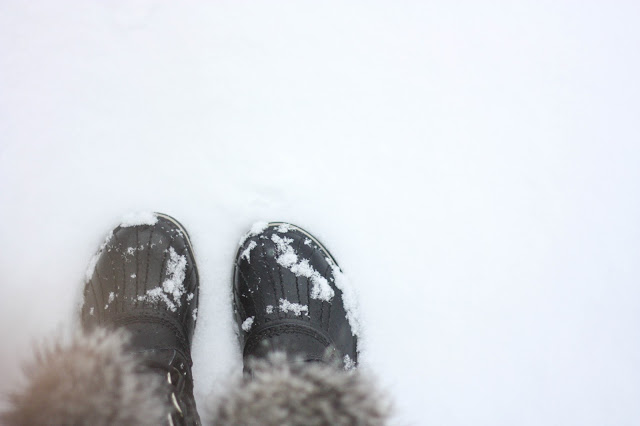 It really is endless....Leaves of Grass is sloooooow going. I think it's growing, it has to be. I'm crossing off rows on the chart, and the yarn is disappearing at a rapid rate, but I'm not seeing the shawl growing. It's just an endless row after endless row. I haven't broken from my knitting monogamy. Not really. Well... maybe.

Confession time: I bought more yarn. I bought yarn for the Afmæli sweater and for the Maude cardigan. For Afmæli I bought the suggested yarn, in the lovely rainbow colours. For Maude my initial plan had been to use the Quince & Co. Owl in either cranberry or hemlock, but the cost was prohibitive. So instead I headed over to my local yarn shop (dragging my sister along for company), and purchased Rowan pure wool superwash worsted in electric. I did knit a few swatches, and even cast on, but it wasn't working out for me, so I ripped it out, and went back to my monogamous ways. Clearly the whole multiple works-in-progress thing wasn't going to work out for me. Not this time. At any rate, after the shawl that gives me two sweaters and a pair of socks to make.

Also, Family Day, not much knitting was done. Much to my surprise. I had planned on knitting, but it ended up being cleaning day. However, I ended up being incredibly bored (and I still didn't know... don't ask, I'm not sure what was wrong with me) and I did start planning out some Christmas gifts for this year. I'm quite proud of it actually. A nice, detailed spreadsheet, with the patterns linked, along with an idea of pricing and what yarn and how much yarn I'll need. Seems early, but with the patterns I have in mind, I'll need the time. And I need to be able to budget for it too. I'm a self professed yarn snob, and I don't like working with cheap, crappy yarn, so things can get pricey fast. At any rate, if I stick to my plans, I'll be a colour-work whiz by 2017! Wish me luck!
Posted by Dana at 21:45 No comments:

As a Canadian, I know the annoyance of everything being American. Seriously. It's 2016, can we not get everything here without having to order it from the States, and pay stupid exchange rates, not to mention the possibility of customs. There's nothing worse than ordering $100 worth of something, only to end up paying double that. Ugh. It might be a sore spot... Reality is, I don't mind paying $200, but I would like to know up front and not have it be a big surprise.

So I've compiled a list of a few shops that look promising, and they have taken care of the ordering and exchange rate. So I know the CAD$ price right off the bat. Maybe I'm lazy, but I hate calculating that, and the trying to calculate American shipping to Canada. That's always a crapshoot. I prefer standard, Canadian shipping rates. There are just way too many variables when ordering from the States.

Beehive Wool Shop - Brooklyn Tweed. In Canada. Hallelujah. This place is based in Victoria BC, and I wish I had known about it last time I was in BC. (We'll ignore the fact that last time I was there, I was not obsessive about knitting.) I ordered the yarn for Leaves of Grass from them, and service was fast. There was even a nice little handwritten note inside.

Espace Tricot - based in Quebec, and much to my glee they carry Quince & Co. which I am dying to get and try. They also have Madelinetosh, Handmaiden, and Woolfolk, among many others. They do have free shipping on orders over $200.00 to orders in Canada and the US, and any knitter knows that it's not at all difficult to hit the $200.00 mark... Haven't used them yet, but an order will be in the very near future.

Ram Wools - I ordered wool for the Afmæli sweater from them. Received an email a few days later that the wool was backordered. Turns out they're expecting a shipment in a few weeks. Which leaves me out of money, and nothing to show for it. Not a huge fan of that, but as long as the yarn shows up, I can forgive them for that. Still, it would be nice to have known it was backordered before ordering. At any rate, it's probably not a bad thing. After I ordered the yarn I told a friend that it would be best if it took a long time for the yarn to get here, so I could finish my shawl... and since that point I've bought yarn for a cardigan., but let's not get into how much money I've spent this month on yarn...

Wet Coast Wools - A Vancouver based shop. They carry Jordana Paige's Butler organizer and her Cora bag, both of which look fantastic.
Posted by Dana at 16:39 2 comments:

In which yarn is beginning to take over...

I'm normally a neat person. I like everything neat and tidy; I like knowing where everything is and being able to find what I need at a moment's notice. But yarn... I can't figure out how to keep it contained. I have 4 big brown bags stuffed with yarn sitting in the corner of my room. My knitting bag is hanging on the closet doorknob. My roll top desk is open, and there's a ball of yarn, a swatch for a sweater, a knitted scarf, probably 7 sets of knitting needles for knitting swatches for said sweater, 2 versions of the same sweater pattern because my darn printer cut off the top and bottom lines of each page (I am ignoring the fact that that is probably my fault for not setting the correct sizing option... clearly it's the printer's fault), on the floor I have a second swatch blocking, there's 2 pairs of finished socks (1 needs the ends woven in) as well as 2 more balls of sock yarn on my dresser. I even have a sweater pattern sitting on my nightstand. And that's just the beginning of the mess in here. There's a whole bunch of other stuff that is not yarn related, and we are not going to go into that.

At any rate, I plan on using Family Day tomorrow to straighten things out, but obviously to also spend numerous hours knitting, guilt free.

Family Day is such a weird holiday for me. Really. When you have 4 siblings, have been homeschooled your whole life, and still live at home, every day is family day. I'd rather have a non-family day holiday. In my head this non-family day consists of sleeping in, then spending the morning in pjs, drinking tea (or more likely, hot chocolate) and maybe having tasty banana bread for breakfast, or blueberry muffins, then leisurely knitting by the fire. And the rest of the day would probably go on in the same fashion. Although adding some Downton Abbey into the mix would be a good idea.

Now that I think of it... that's basically what I'm going to do anyways. Minus the fire and muffins. I'll be holed up in my room and eating mushy fig bars. But the rest if pretty accurate... Now if only I could turn off my internal clock, which insists on waking me up at 8 at the latest. Even on days when I have time to sleep in...
Posted by Dana at 23:09 No comments:

Currently I have this big blob of blue knitting on my needles... 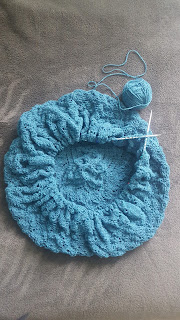 It's on its way to becoming Jared Flood's Leaves of Grass. But at 580 stitches per round, it's slow going.

I consider myself to be a monogamous knitter... most of the time. I try to be, really I do. The pull of multiple projects and not knowing what to knit first gets to me. Which is why I am torn about the idea of casting on a pair of socks while this shawl is in progress. Because on one hand it feels like I'm cheating on my beautiful shawl. But on the other hand, I'd rather not try to knit it, and then screw it up because I was trying to talk to people at the same time. At 580 stitches a row, that's not a risk I'm willing to take.

The reluctance is also probably due to Christmas knitting. Having caught the knitting bug shortly before Christmas, I decided to take on the task of knitting all my Christmas gifts this year. Which left me with 11 gifts to knit in the space of about a month and a half. (Confession: I failed. Only 9 of the 11 projects were completed in time, the last 2 have been designated as birthday gifts now, as the intended recipients were not expecting a gift from me. Crappy excuse, I know... but I'm sticking with that.)

With all this multiple project knitting came guilt as well. Guilt that I was whipping through a quick easy project, when working on that pair of socks for my dad would be a smarter idea... since socks take longer than a hat knit in chunky wool.

Still torn on the casting on of the socks... but one thing I do know: That I will be prepared for Christmas this year. Well prepared. I have every intention of having all my gifts done before December starts, and based on my personality, I'm pretty confident that I will be able to manage this.